How to evaluate evidence of the efficacy of medicines

When determining if a medicine or a vaccine is effective against a particular disease, or if a vaccine or medicine causes side effects, we use the concept of evidence.

But what does evidence mean?

So, evidence does not mean proof or one truth. Evidence changes over time as new knowledge emerges and is based on the currently best knowledge. Evidence and experience are also two different things. Personal experience or single observations constitute weak evidence. But they may be used to formulate new hypotheses that can be investigated scientifically.

There are different levels of evidence from weak to strong. When testing a hypothesis, researchers have many different research methods at their disposal. Which method is most suitable depends on the subject to be investigated. It is also taken into account if several (and good) studies come to the same result. If several different studies carried out by different researchers come to the same result or point in the same direction, the evidence is strong, and the hypothesis has been substantiated. It could also be the case that the majority of a number of studies point in one direction, while a few other studies point in another direction. However, strong evidence is dependent on systematically, thoroughly and objectively selected research design and studies.

How is evidence assessed?

Individual results and studies make up the pieces of a large puzzle. When assessing studies and the level of evidence, it is considered if the underlying hypothesis is relevant, how the study is designed, how many participated in the study, how long the study took, how large the measurable effect was, what other knowledge is available in the area, and finally how many studies point in the same direction.

It also matters how robust the study is. The evidence pyramid (or evidence hierarchy) is used in health scientific research to indicate which types of trials provide the strongest evidence. Studies with the highest position in the pyramid are considered most important. 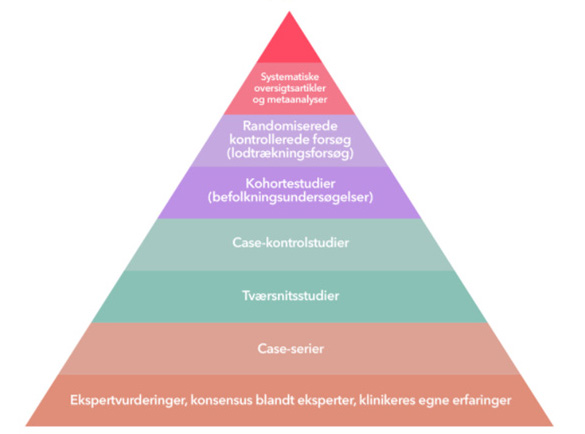