The Danish Medicines Agency has received 830 reports of suspected adverse reactions with tramadol since the medicine was marketed in March 1993. 155 of them describe symptoms of dependence. This follows from a report that has just been published. In 2017, about 265,000 individuals received treatment with tramadol in Denmark.

The Danish Medicines Agency has just published a new report that analyses all reported suspected adverse reactions involving tramadol dependence. The report states that the Danish Medicines Agency has received 830 reports on suspected adverse reactions of tramadol since the medicine was marketed in March 1993. 155 of these ADR reports describe symptoms of dependence, the majority being reported in the period after the stricter reporting requirements were implemented last year.

The ADR reports typically describe symptoms of restlessness, insomnia, anxiety and dependence. In 13 of the reports, the adverse reactions are suspected to have started already within the first 14 days after treatment with tramadol was initiated, suggesting that dependence and tolerance not only occur in long-term use of the medicine. It also suggests that the dependence symptoms are typically experienced when the medicine is stopped or tapered off – regardless of dose and treatment duration. However, some of the reports also involve cases of dependence that are not related to patients tapering off of discontinuing treatment.

More ADR reports than in the previous 24 years

The results of the report confirm a previously identified problem and support the initiatives that the Danish Health Authority and the Danish Medicines Agency have launched in the field of pain relief in general and regarding tramadol specifically.

“The stricter reporting requirements have helped to focus attention on tramadol’s dependence potential, and this is a good thing. During the 12 months with stricter reporting requirements from September 2017 to September 2018, we have received more reports of dependence compared to the volume received in the past 24 years combined”, said Pierre Quartarolo, Director of Division of Pharmacovigilance & Medical Devices.

“It is important that tramadol is now aligned with the other medicines in the morphine class. The stricter reporting requirements and the fact that the dispensing status of tramadol has now been changed has helped us to raise general awareness among doctors of tramadol and opioids”, he says.

However, the data basis of the report is not strong enough to be used as the only basis to draw final conclusions on the association between dose, treatment duration and dependence.

Focus on tramadol and opioids

In the last few years, there has been strong focus on the use of tramadol and opioids from the authorities. Besides the stricter reporting requirements for tramadol, the dependence potential will be indicated more clearly in the product information of tramadol, and the medicine’s dispensing status has been changed so that it can only be dispensed one time on the same prescription by pharmacies and can be monitored in line with other types of opioids.

In addition, the Danish Health Authority has in recent years concentrated efforts on pain treatment, including efforts to reduce opioid consumption. Among other things, the Danish Health Authority has issued several articles on pain-relief in the monthly magazine ‘Rational Famakoterapi’ (in Danish only), offered courses on pain treatment and revised the guideline on the prescription of addictive medicine to support patient safety and prevent dependence. 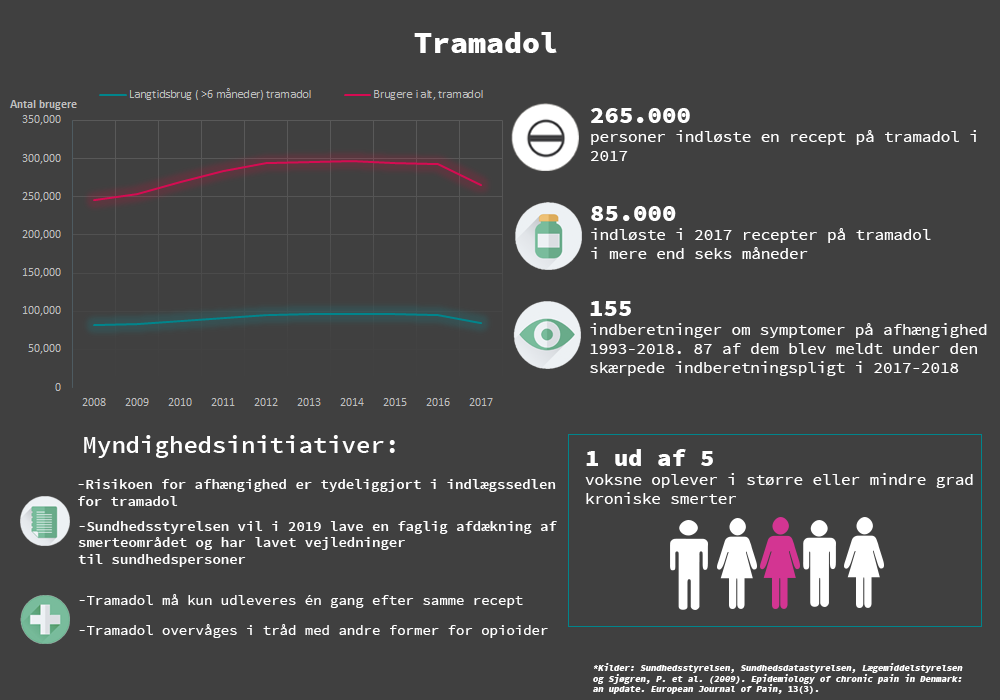 Adverse reaction reports on tramadol dependence (in Danish only).

Read more about pain treatment and opioids on the website of the Danish Health Authority (in Danish only).

Tramadol is a pain-relieving substance belonging to the group of opioids. All opioids can cause both physical and psychic dependence. Tramadol has been marketed in Denmark since 1993.

Doctors are required to report all suspected adverse reactions of tramadol to the Danish Medicines Agency for as long as the stricter reporting requirements apply. When the stricter reporting requirements cease, doctors must continue to report all suspected serious and unexpected adverse reactions to the Danish Medicines Agency.